The USA TODAY Network has partnered with legendary artist Peter Tunney to create two original paintings that we’ve turned into animated NFTs to benefit charity. All proceeds will equally benefit The Sunny Center to help individuals who have suffered the injustice of wrongful conviction and the Gannett Foundation which supports community-building initiatives across the country. 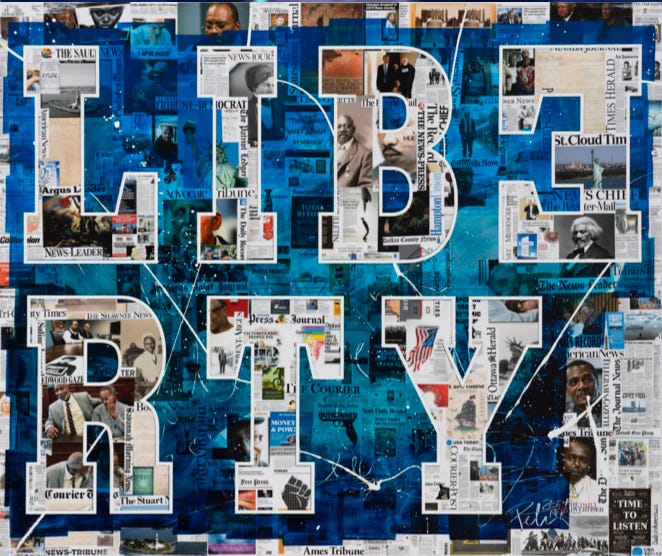 One person will win the auction to own BOTH the original 5’ x 6’ painting and the one-of-a-kind NFT, “Liberty,” an impassioned visual statement in defiance of wrongful imprisonment.

Don’t know what an NFT is? Go here to find out

Tunney is known for his innovative mixed-media use and work that evokes optimism and hope with simple yet powerful truths. His pieces can be seen from the streets of New York City, where dozens of billboards have lit up the skyline for over a decade, down to Miami’s Wynwood Walls, where he pioneered the famed colorful urban-art display. His work is collected widely throughout the world by serious art collectors and well-known celebrities.

Tunney used original pages from USA TODAY and our network of more than 250 local newspapers to create intricate and mesmerizing collages as the base for these dynamic paintings and NFTs. “Grattitude,” which is spelled with two t’s, as in the inseparable concept of “attitude,” is a limited run NFT on sale now for just $250 while they last. “LIBERTY” is a fiery tribute to the wrongfully incarcerated. The painting and singular NFT will be auctioned to the highest bidder. The auction opens  Monday, Nov. 29 at 9 a.m. ET and ends on Wednesday, December 1 at 8 p.m. ET. The bidding starts at $50,000. Gannett will be offsetting the NFT carbon footprint with carbon credits.

This is an opportunity not just to own one-of-a-kind, cutting-edge, legacy art, but to right injustice and strengthen communities – and use art to help make the world a better place.

Visual journalist Pat Shannahan turned Tunney’s painting, “Grattitude,” into two distinct animations. One celebrates gratitude with bouncing, cheerful emojis; the other emphasizes Peter’s irrepressible “Attitude of Gratitude” outlook. 250 individually-minted NFTs of each animation are for sale until sold out. Don’t miss your chance to own a vibrant digital animation of the noted artist’s painting.

So what is there to be grateful for this holiday season? Truthfully, a lot.

There has never been a better time to be genuinely thankful than this holiday season, one that arrives on the heels of a wrenching two-year global pandemic. In fact, we as a society are uniquely poised to feel profound gratitude because of our tough times. Don’t blow this chance to improve your health and wellbeing by committing to making gratitude a daily practice.

Artist Peter Tunney discusses two pieces of art that will be sold to raise money and awareness for issues surrounding wrongful incarceration.

World-renowned Neo-pop artist Peter Tunney began his journey in 1987, when he decided on a whim to re-brand himself from an investment banker. He says he told friends he was “going to be an arist now,” with no absolutely no plans, “for no apparent reason.” He became known for his signature style, where he takes brightly colored words or short quotes he paints over emotionally stimulating images from newspapers, magazines and books tend to evoke optimism and hope with simple, yet powerful truths.

As animated and passionate as he is about art, Tunney is even more so when talking about the people who around 15 years ago inspired him to get involved with the issue of wrongful incarceration.

About the Sunny Center

The Sunny Center Foundation is a non-profit organization that helps people who have suffered the injustice of wrongful conviction, giving them support after they have been exonerated and released from prison. The organization was established by Sunny Jacobs and Peter Pringle, both of whom were sentenced to death for crimes they did not commit. The foundation uses a unique holistic approach encompassing physical, mental and spiritual healing and ongoing support at The Sunny Healing Retreat Center in Ireland and the Sunny Living Center in Tampa, Florida. To learn more visit https://sunnycenter.org/.

“I was so humbled, I was so stunned,” he said of learning about one young mother who was sentenced to death for the 1976 shooting deaths of a Florida Highway Patrol officer and his friend in Broward County, Florida. “You were on death row? You? And now you’re here and you’re the most grateful person in the world?”

That woman, Sonja “Sunny” Jacobs, was released after spending 17 years behind bars, and went on to run The Sunny Center, where exonerees can go to heal their souls after suffering the trauma of wrongful conviction and incarceration, Tunney said.

“She’s got every reason to be pissed off and she’s not,” Tunney said. “When these guys tell their stories, your problems evaporate.”

Tunney is dedicating his portion of the proceeds from his latest art collaboration with the USA TODAY Network to The Sunny Center, creating the project out of about 700 articles from some of the hundreds of Gannett papers nationwide. Each touches on the issue of wrongful incarceration or the concepts of liberty or gratitude.

Find out more about Tunney and his artwork here.

Brad Zinn, a reporter at The News Leader in Staunton, VA, worked for years to help get Rojai Fentress released from prison, where he had been since the age of 16. Fentress sent out 50 letters to the media from prison – and only one journalist responded and followed through. Zinn’s coverage – and his uncovering of missing evidence in the case – led The Innocence Project to take it on and further led to the Virginia governor’s surprise pardon.

Fentress spent 24 years behind bars. Zinn rushed to the prison for the release: “It was magical to watch. When Rojai was standing out there in the parking lot, looking at the mountains, sitting on the grass, speechless at times, hugging everyone, it was emotional and powerful. Words don’t do it justice, it really is something you’d have to experience to understand.”

Jerome Powell is nominated as Fed chair for second term