Zelenskyy asks US ‘to do more’ on sanctions, aid 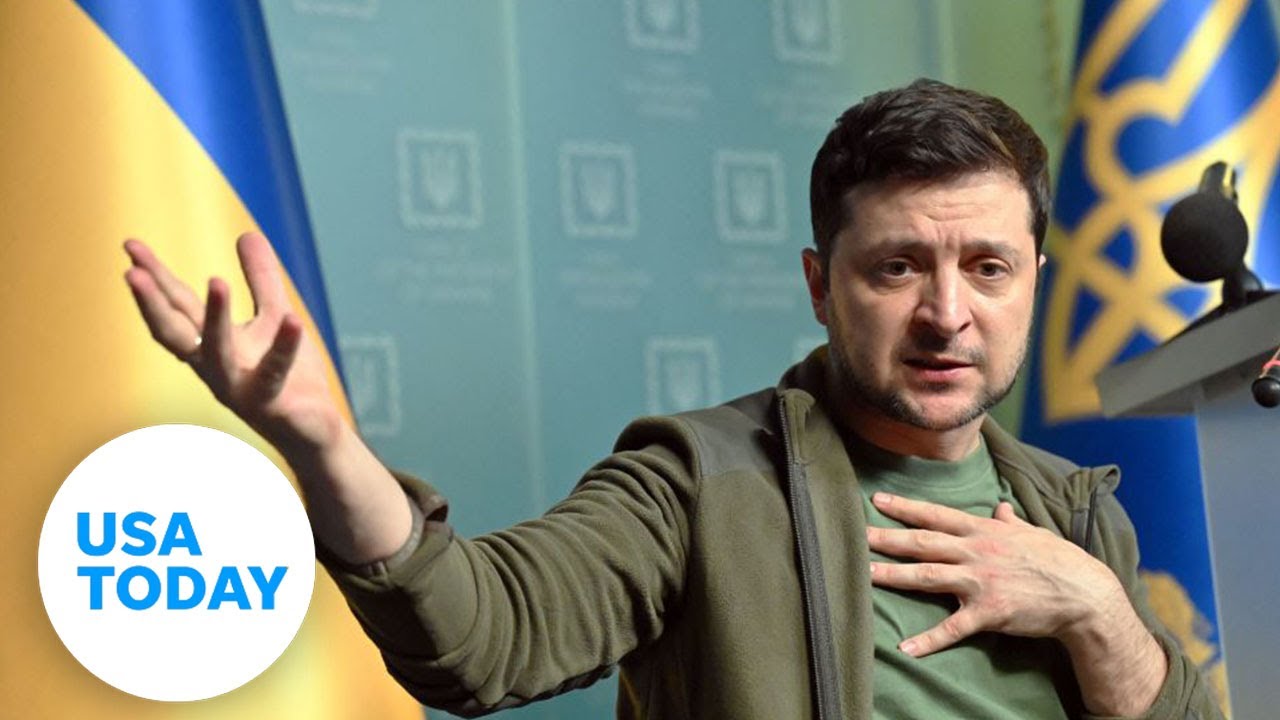 Ukrainian President Volodymyr Zelenskyy, drawing parallels to horrific moments in American history to explain his country’s plight, called on the U.S. to ramp up its aid to Ukraine in a virtual address to Congress on Wednesday, three weeks into his nation’s fierce struggle to repel invading Russian troops.

“Right now, the destiny of our country is being decided, the destiny of our people,” said Zelenskyy, who drew a standing ovation from Congress at the start of his speech from Kyiv. “Whether Ukrainians will be free, whether they will be able to save their democracy.”

Zelenskyy referenced Pearl Harbor and the Sept. 11 attacks to explain to members of Congress the situation his country faces now. This is Ukraine’s experience “every day, right now.”

Earlier Wednesday, Zelenskyy suggested there was some reason to be optimistic that negotiations with Russia might yet yield an agreement. He said in a video address to his nation that Russia’s demands were becoming “more realistic.” The sides were expected to speak again later Wednesday.

Meanwhile, Kyiv suffers. Shrapnel from an artillery shell slammed into a 12-story apartment building in central Kyiv on Wednesday, obliterating the top floor and igniting a fire, according to a statement and images released by the Kyiv emergency agency.

The neighboring building was also damaged. The agency reported two victims, without elaborating.

Russian forces have intensified fighting in Kyiv suburbs, notably around the town of Bucha in the northwest and the highway leading west toward Zhytomyr, said Oleksiy Kuleba, head of the Kyiv region, on Wednesday.

THE NEWS COMES TO YOU:  Get updates on the situation in Ukraine. Sign up here.

►The 2015 Ukrainian satirical comedy series “Servant of the People,” which Zelenskyy starred in, is available on Netflix. Zelenskyy playing a teacher who unexpectedly becomes President after a video of him complaining about corruption goes viral.

►The International Chess Federation suspended the national teams of Russia and Belarus from participation in official tournaments “until further notice.” Chess is extremely popular in Russia.

►Zelenskyy signed a decree creating a daily, nationwide minute of silence for 9 a.m. to “remember the Ukrainians who gave their lives, all those who fought, all the military, civilians and children.”

► Russian President Vladimir Putin has signed a law allowing foreign planes to be seized and used domestically, Russia’s Tass News Agency reported. Most foreign airlines have paused service to Russia due to the war and sanctions.

►At least 103 children have died and more than 100 others have been injured, said Ukrainian Prosecutor General Iryna Venediktova.

Russia’s invading troops are struggling with Ukrainian terrain, forcing them to remain on roads where Ukrainian forces have slowed their progress, according to British Defense Ministry assessment. The Russians have been reluctant to drive off-road in Ukraine, and Ukrainians have further stalled their advance by blowing up bridges, British defense attache Mick Smeath said in a statement Wednesday morning.

Russian warplanes have failed to control Ukrainian airspace, according to the British and U.S. military, further limiting the invaders’ ability to protect its ground forces.

“The tactics of the Ukrainian Armed Forces have adeptly exploited Russia’s lack of maneuver, frustrating the Russian advance and inflicting heavy losses on the invading forces,” Smeath said in the statement.

Zelenskyy calls for new alliance, U24

Ukrainian President Volodymyr Zelenskyy called for the creation of a “United for Peace” alliance of “responsible countries that have the strength and consciousness to stop conflict immediately.”

“We need to create new tools to respond quickly and stop the war the full scale Russian invasion of Ukraine, which began on February 24,”

Dubbing it “U-24,” Zelenskyy referenced 24 nations that are actively working with Ukraine to find a peaceful resolution to the crisis. “A union of responsible countries that have the strength and consciousness to stop conflict immediately. provide all the necessary assistance in 24 hours,” he said.

Zelenskyy asks US companies to pull out of Russia

Saying Russia is “flooded with our blood,” Zelenskyy called on U.S. companies to abandon their operations in Russia.

The Ukrainian president asked for more U.S. sanctions against the Kremlin and to establish a no-fly zone in Ukraine as he made his address to a joint session of Congress on Tuesday.

“We propose that the United States sanctions all politicians in the Russian federation who remain in their offices and do not cut ties with those who are responsible for the aggression against Ukraine,” Zelenskyy said.

Members of Congress, some donning lapel bins bearing the U.S. and Ukrainian flags, filled a Capitol Hill auditorium as they await Ukrainian President Volodomyr Zelenskyy’s address to a joint session. Zelenskyy spoke via a video feed to lawmakers. Ukrainian Ambassador to the United States Oksana Markarova also is in attendance for the speech.

“I suspect that what he will say will weigh very heavily on the hearts of a lot of folks here. He makes an incredibly compelling case that Putin will only stop when we stop him,” Sen. Chris Coons, D-Del., said before the speech began.

He added: “Why wait until he rolls over Moldova and Georgia and the Baltics? Why wait until he finishes destroying a proud and independent nation to act? It really is just a fundamental question of how much risk are we willing to take — that a cornered authoritarian with one of the world’s largest nuclear arsenals will use it?”

Blinken left the door open to lifting crippling Western sanctions on Russia’s economy should the invasion end while cautioning that the moves are already making global business and finance hesitant of investing in Russia in the long term.

“If the war ends, Ukraine’s independence, territorial integrity, sovereignty are restored then many of the tools that we’re using to get to that result—of course, that’s the purpose of them, they’re not designed to be permanent,” Blinken said.

Mom who fled Ukraine now worries about life in US: ‘I don’t know what to do’

Last week, single mom Olga Kovalchuk was hunkered down in a Ukraine basement with her children in a basement while bombs and missiles rained over Cherkasy, a city of 278,000 on the Dnieper River.

This week, they are in a foreign land – San Diego – where Kovalchuk has no place to live, no relatives, no job. But her kids are safe.

Like more than 3 million other Ukrainians fleeing the Russian invasion, the 37-year-old says she is simultaneously looking back and ahead. In Ukraine, a career as an interpreter allowed Kovalchuk to work mostly from home, looking after the children. Now, the kids will need to find schools, learn English, adapt to a new culture.

“I was very angry. I didn’t want to leave. I’m a patriot,” she says, adding that she had to go “to save the lives of our children. Still, sometimes I feel shame because I left.” Read more here.

International students who had been studying at Ukraine’s Sumy State University have finally returned to their home countries after being trapped in the school’s six hostels for two weeks with little food and water as the war raged.

The students — from India, Nigeria, Turkey and South Africa, among other countries — eventually found their way home over the course of last week and weekend after many days of travel by bus, train and plane throughout Ukraine and across borders.

Students had turned to social media to plead for help, using the hashtag “SaveSumyStudents.” But with limited access to electricity, calling attention to their plight was also difficult.

“We never had a plan, and every method of communication was lost, I couldn’t communicate with my parents,” said Samuel Olaniyan, a fourth-year student who returned to Nigeria a few days ago. “It was very, very scary.” Read more here.

President Joe Biden on Wednesday is expected to announce an additional $800 million in military aid for Ukraine, according to a White House official, bringing the total U.S. support for Ukraine to $1 billion in just the last week.

Biden will announce the aid in an 11:45 a.m. ET speech, shortly after Ukraine President Volodymyr Zelenskyy is expected to urge for greater assistance during a virtual address to the U.S. Senate and House earlier in the morning.

“We’re moving urgently to further augment the support to the brave people of Ukraine as they defend their country,” Biden said Tuesday. “And I’ll have much more to say about this tomorrow — about exactly what we’re doing in Ukraine.”

The additional $800 million will mean more than $2 billion in U.S. aid has gone to Ukraine since Biden entered office. The money has paid for an assortment of military equipment including 600 Stinger anti-aircraft systems, 2,600 Javelin anti-armor systems, nearly 40 million rounds of small arms ammunition, 200 grenade launchers and ammunition, 200 shotguns and 200 machine guns, according to the White House.

In addition, Biden signed into law a government funding bill Tuesday that will provide $13.6 billion in humanitarian aid, economic support and defense assistance for Ukraine and the region.

Russian losses on battlefields in Ukraine have stalled its offensive and forced it to seek reinforcements from troops stationed in the Pacific and paying mercenary forces, according to the British Defense ministry. Russia has been seeking mercenaries from Syria and elsewhere to fight in Ukraine.

“Russia will likely attempt to use these forces to hold captured territory and free up its combat power to renew stalled offensive operations,” British defense attaché Mick Smeath said in a statement Tuesday evening.

Ukrainian resistance has hampered advancement by Russia, whose ability to hold territory it seizes would be degraded by continued losses, according to British military intelligence.

Earlier Tuesday, a senior Defense Department official said the Russian offensive against Ukraine’s major cities, including Kyiv, was not progressing.

But Russian forces continue to bombard Kyiv with artillery and missile fire, striking residential areas with increasing frequency, according to the official, who shared battlefield assessments on the condition of anonymity.